By Daniels Nwokike, The Sight News

ABUJA: In a bid to synergize the activities of the Armed Forces of Nigeria (AFN), the Defence Headquarters (DHQ) has charged the Theatre and Field Commanders to strictly adhere to the joint operational structures which has been established, to further combat emerging security challenges in the country.

A statement made available to the press by the Acting Director Defence Information, Colonel Onyema Nwachukwu, revealed that this charge was given to the AFN during the just concluded training conference organised by the DHQ, held in Abuja.

Speaking at the event, the Guest of Honour, the Minister of Defence (MOD), Mansur Muhammad Dan Ali, described the training and retraining as a critical component, essential to shore up efficiency in any organization, especially, the Armed Forces. 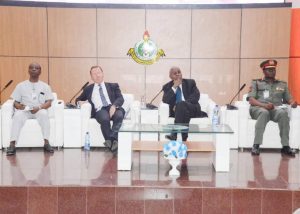 He emphasised that the training is crucial to the success of the efforts of the AFN in order to maintain conducive and secure environment for the economy to thrive.

The minister who was Represented by the Permanent Secretary, Ministry of Defence, Mrs Nuratu Batagarawa, commended the CDS and the Service Chiefs for placing premium on improving the capacity of military personnel, which he noted, is a primary factor in determining the roles played by the AFN in the security of the country.

He further expressed the commitment of the Federal Government (FG) towards providing the AFN and security agencies with requisite  support, and urged them not to relent  in the protection of lives and property, as well as securing the territorial integrity of the nation. 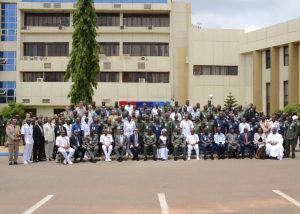 In his remarks, the Chief of Defence Staff (CDS), General Abayomi Gabriel Olonisakin, stated that military operations were among the approaches adopted by the FG to confront the security challenges in the country adding that the conference was part of the AFN’s initiative towards addressing these challenges.

The CDS reiterated the collective resolve of the military and other security agencies in ensuring a safe and secure society for socio-economic growth.

He catalogued some of the ongoing DHQ coordinated Joint Operations to include Operations Whirl Stroke, Whirl Punch, Delta Safe, Safe Haven and Sharan Daji, describing them as successful so far.

General Olonisakin urged all stakeholders to fully harness the decisions of the conference in order to promote jointness in future operations.

Earlier in his address, the Chief of Defence Training and Operations (CDTOPS), Major General Leo Irabor said that the Conference was intended to metamorphose into series of training conferences that would be organized by the DHQ to standardize and harmonize the training doctrines and operational concepts in the AFN.

General Irabor noted that the outcome of the deliberations would indeed add value to the military institutions, both in joint and combined training and operations.

The training was well attended by top military dignitaries and retired generals.