As part of activities marking the 2019 Nigerian Air Force (NAF) Day Celebration, President, Muhammadu Buhari,on Monday inducted two new Agusta 109 Power Helicopters into the Service to boost the performance of the NAF’s constitutional roles of defending the territorial integrity of the country, especially the fight against insurgency and other forms of criminality across the Country.

The induction was one of the main events of the 55th Anniversary Celebration, which started on 27 April 2019, with Research and Development (R&D) Competition/Exhibition and Anniversary Lecture, and came to a climax today at the Eagle Square in Abuja with a colourful and exciting Ceremonial Parade, K-9/Special Forces Display as well as a thrilling Order of Battle (ORBAT) Flypast and Aerial display by some of the platforms in the inventory of the NAF. 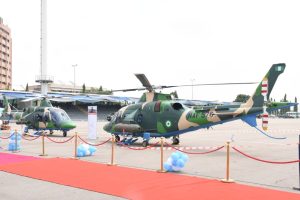 Speaking at the occasion, the Special Guest of Honour, President Muhammadu Buhari, who was represented by the Vice President, Professor Yemi Osinbajo, lauded the Chief of the Air Staff (CAS), Air Marshal Sadique Abubakar, for his commendable leadership of the NAF in the last 4 years.

The President emphasized that training and acquisition of brand new platforms as well as other support equipment for the AFN and other security agencies was intensified.

“I have no doubt that the employment of the newly acquired platforms, in addition to the Super Tucano aircraft, which would be delivered in 2022, would add impetus to the combat efficiency of the NAF”, he said.

President Buhari, who appreciated the contributions of the NAF in addressing the security challenges of armed banditry/cattle rustling and kidnapping in the North West, said the efforts of the Service, in conjunction with other security agencies, had started yielding positive results, thereby restoring Nigeria’s pride and honour amongst the comity of nations. 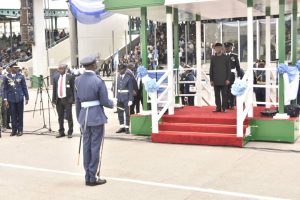 He affirmed that his administration would not relent until every spot within the territory of the country enjoys peace and order, stating also, that the NAF has been fulfilling its Constitutional mandate of preserving Nigeria’s territorial integrity through the employment and projection of air power.

He acknowledged the roles played by the NAF in the last General Elections by airlifting electoral materials as well as aerial surveillance, which contributed to the success of the elections.

While delivering his welcome address, the CAS noted with nostalgia the 55 years of the existence of the NAF which had been very eventful, adding that the Service had been confronted with a myriad of challenges and had surmounted them all, progressively maturing in the process.

The CAS stated further that the NAF had grown in size, spread and equipment holding, all in a bid to fulfill its statutory obligation of protecting and defending the territorial integrity of Nigeria from the air.

According to him, “The growth of the NAF since the inception of the Service has been particularly outstanding. From having only a few trainers and transport aircraft in the early years of the Service, the Nigerian Air Force currently has an impressive ORRBAT comprising diverse aircraft with capabilities to perform a wide spectrum of missions.

“We have also continued to build upon the foundations laid by our noble predecessors by reactivating several aircraft that were hitherto grounded; acquired and inducted various platforms into service and increased the strength of Service personnel by 7,500 airmen/airwomen and 400 officers.

“Additionally, 2 new commands and 2 staff branches were established to meet the evolving security challenges we are faced with”, he said.

The CAS added that the NAF had also established additional units spread across the nation in response to evolving security challenges and had constructed and upgraded existing schools, hospitals and other infrastructure including 2 Reference Hospitals to attend to the welfare of personnel and their families.

“Furthermore, the gap between force projection and force protection capability has been substantially bridged with the training of more than 1,000 Special Forces. These personnel have been deployed as part of the Base Defence forces to deal with the threat to our bases and to support Internal Security Operations in various troubled spots across the country, especially in the North East, North Central and North West, respectively.

“The current status of the Nigerian Air Force is a testament to the continued and sustained efforts by our predecessors since the establishment of the Service”, he stated. 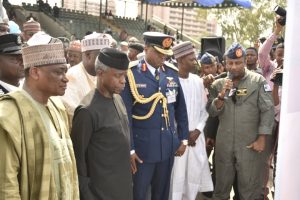 The CAS thanked the President for his continued show of uncommon commitment to meeting the needs of the NAF and improving the capacity and equipment holding of the Service.

The Anniversary Celebration, with the theme “Building Capability for Defence of Nigeria’s Air Space while Responding to National Security Imperatives”, ends today with a Gala/Reunion Night.

There’s Room for Everyone to Operate in LPG Sector – Baru