The Sight News gathered that the visit to NIPOST by the High Commissioner, was with the intention of exploring areas of mutual cooperation between the agency and Bangladesh High Commission in Nigeria.

The meeting also involved discussions bothering on the need to foster the bilateral relationship between both countries, especially in the area of producing a commemorative stamp in honour of the Bangladesh founding father Bangabadhu Sheikh Majibur Rahman which will commence on March 17, 2020 with several events lined up for a period of one year. 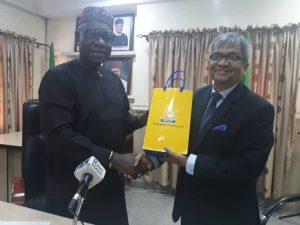 In his remarks, the Postmaster General Dr. Ismail Adebayo Adewusi thanked the High Commissioner for his visit to the NIPOST, adding that in the area of producing the commemorative stamp for the founding father of Bangladesh, the agency is willing and ready with her resources and expertise to partner with the High Commission in achieving such assignment.

He noted that by doing so, the agency is projecting the name and image of Nigeria in a positive light to Bangladesh as a country and the world at large.

On the time frame to produce the commemorative stamp, he said the discussion between the High Commission and the agency has just begun, as other discussions with other committees to be set up will get on the way.

Dr. Adewusi further noted that he was pleased to work with the Bangladesh high Commission in achieving the assignment and also increasing the bilateral relationship between both countries. 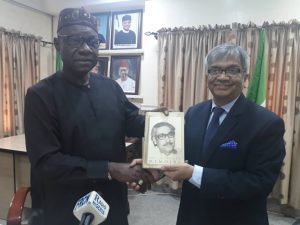 Earlier, the Bangladesh High Commissioner, Md. Shameem Ahsan, appreciated the Nigerian government for their support to him so far, and assured the NIPOST management of his willingness to further extend the relationship he has been enjoying, by exploring all forms of cooperation required to smoothen the bilateral relationship.

Mr. Shameen Ashan further noted that Bangladesh and Nigeria have similarities in population, love for sports especially football and love for rice.

The meeting which was held at the NIPOST boardroom, had in attendance officials of the NIPOST and directors as well as the Third Secretary and Head of Chancery, Bangladesh High Commission, Mr. Mohammad Ekramul Hoque.