NiMet Gets Improved Condition of Service for Staff

The Director General, Nigerian Meteorological Agency (NiMet),  Prof. Sani Abubakar Mashi, has on Thursday revealed that the Agency now has a new and improved Condition of Service for its staff.

The DG who said this at a press briefing to herald the upcoming 2020 Seasonal Rainfall Prediction, noted that the Condition of Service for the Agency was approved in December 2019 by the Head of the Civil Service of the Federation.

The Condition of Service clearly spells out the entitlements of every staff of the agency, he revealed.

He also said that since the coming of this Administration, Promotion Exercise in the Agency has been regular, and in 2019 alone: 379 Officers were promoted; 105 Officers advanced to the new grade level; 9 Officers were upgraded, and 19 Officers were converted.

In the same vein, the DG revealed that the Management is working assiduously to ensure the implementation of the payment of National Minimum wage and all the payment of the arrears with National Salaries and Wages Commission and Office of the Accountant General of the Federation. 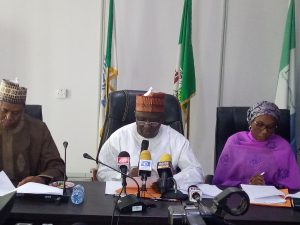 Speaking on the Seasonal Rainfall Prediction, he said, “In continuation with our tradition of always presenting the Seasonal Rainfall Prediction during the first quarter of the year in order to help policy makers and farmers plan ahead, we wish to announce that this years SRP would be unveiled to the general public on Tuesday, the 21st of January, 2020 at the NAF Conference Centre, Kado, Abuja”.

The 2020 Rainfall Prediction he said, will highlight vital information that may affect socio-economic activities in the air, land and water transportation, agriculture, water resources, disaster management and mitigation, tourism, sports, health, building and construction, energy sectors etc in the course of the year.

“Forecast information that have been provided include: the onset and cessation dates of the 2020 rainy season; the downscaled total amount of rainfall expected in all the 774 Local Government Areas of the country; temperature forecast as well as malaria and meningitis forecast”, he remarked.

“NBTE has already granted provisional approval for commencement of the programs. Our first batch of students shall resume in September 2020”, the DG said. “This is not only the first in Africa, but the 2nd in the world beside the South American Training Institute in Ecuador”.