ABUJA: Following the suspension of the proposed national carrier, ‘Nigeria Air’, the Minister of Transportation, Hon. Chibuike Amaechi has disclosed that cabinet members are divided on the establishment modalities.

This is just as he noted, that the ‘Nigeria Air’ project is still in the government’s plan and has not been abandoned.

Amaechi, who made these known on Thursday in Abuja at his valedictory press briefing, said that some Cabinet members believe the Federal Government should invest and sell the equity later, while others are calling for investors.

Recall that the Minister of State for Aviation, Senator Hadi Sirika in September 2018, suspended the proposed national carrier, ‘Nigeria Air’ without a definite reason.

According to Amaechi, “On national carrier, (the) cabinet is divided on the issue of modality. There are those who believe that the Federal Government should invest and then we can sell the equity later.

“There are also those who believe that no, and from day one, they say— let us get investors in and give them the franchise of Nigeria Airways or Air Nigeria or whatever it is called. That is where we are and that is what held it down.

“But as for whether it is still in our plan, it is and has not been abandoned”, he said. 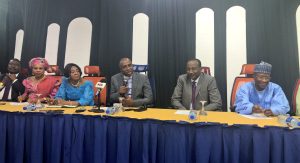 The Minister also stated that China has insisted that Nigeria opens a sinking fund and an escrow account to ease repayment of the loans for the construction of rail projects.

He urged the Permanent Secretary of the Federal Ministry of Transportation, Sabiu Zakari to make sure that the Nigerian Railway Corporation (NRC) complies with the request of the Chinese government in opening the required accounts.

He also instructed that all the money from Kaduna-Abuja railway every month, be put it in an account after cost of operations have been removed.

“Whatever remains, let us start paying back, let’s develop a sinking fund or an escrow account where we pay that money into.

“So that we can on our own start the payment before the Federal Government starts paying.

“Why I say this is because when we got to China, they insisted because of what they experienced with Kenya, Somalia and Sudan on their inabilities to pay back. They insisted that we must open two kinds of accounts; an escrow account and a sinking fund account.

“The sinking fund account will require that every year, we will put money there which is for the repayment of the loan, while the money for the management of that operation will be put in the escrow account”, he said.