The Managing Director and Chief Executive Officer of the Nigeria Deposit Insurance Corporation (NDIC) Umaru Ibrahim has advised Nigerians to exercise maximum caution in the adoption of crypto-currencies as their preferred mode of financial transactions.

He warned that while various forms of digital currencies currently in operation have their positive and negative attributes, those who patronize them risk losing their savings because the medium is largely unregulated and without  the backing or support from the traditional Central Banks in almost all financial jurisdictions.

The NDIC Boss made the remarks during the courtesy call by the Board and Management of the Corporation on the Speaker of the Federal House of Representatives, Rt. Hon. Femi Gbajabiamila in his office at the National Assembly Complex, in Abuja.

Earlier, in her opening remarks, the Chairman of the Board of the Corporation, Mrs. Ronke Sokefun, informed the Speaker that the NDIC remained a critical player in the Nigerian financial safety net that had contributed immensely to the growth and stability of the nation’s financial stability in the 30 years of its operations using best practices.

She added that recently the NDIC became the first public sector institution in Nigeria to be awarded three International Standard Organization (ISO) certifications simultaneously by the British Standards Institute (BSI) in view of its result oriented system, processes and procedures.

The Board Chairman solicited the assistance of the House in the passage of the NDIC Act Amendment Bill currently before the National Assembly.

In his response, the Speaker commended NDIC on the visit, describing it as a right step towards fostering harmonious working relationship with agencies in the executive arm of government. 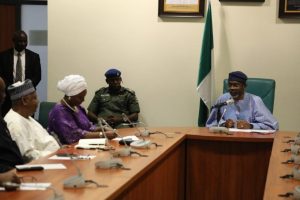 On the issue of Crypto currency, he noted that as the entire world currently exploited ways of mainstreaming its use into the global financial landscape, NDIC and other safety-net participants in the country must not be left behind in the adoption of appropriate regulatory framework to deal with the prevalence of crypto currencies in the global financial space.

The Hon. Speaker added that only recently, there was a meeting of world leaders in Osaka, Japan to deliberate on the subject.

Responding to a specific request from the Board and Management of the Corporation, he assured that the House, under his leadership will ensure that the most appropriate Committee is assigned to handle the oversight functions of the Corporation.

Capacity Building: NAF to Strengthen Ties with Bangladesh in Pilot Training, Others