by TheSightNews .
in Entertainment, Security
0

The Nigerian Air Force (NAF) on Tuesday graduated its first set of pipers at a colourful ceremony held at NAF Base, Bill Clinton Drive Abuja, which signaled the formal induction of the Pipe Band into the NAF.

Twenty-five NAF personnel, comprising 22 airmen and 3 airwomen, successfully completed the course. The establishment of the Pipe Band, is in line with one of the key drivers of the Chief of the Air Staff (CAS), Air Marshal Sadique Abubakar’s Vision, that is; “human capacity development through robust and result oriented training for enhanced professional performance”.

The Pipe Band is a key part of the full complement of military music systems, hence its induction will add glamour, aesthetics and pride to NAF ceremonies and events, said the Director of Public Relations and Information (DOPRI), Air Commodore Ibikunle Daramola in a statement.

Speaking during the graduation ceremony, the CAS expressed delight with the level of proficiency of the new NAF Pipe Band, which he said, attested to the quality of the training they had received. 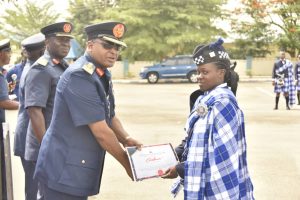 He commended the Administration Branch for the initiative, noting that, with the establishment of the Pipe Band, amongst other innovations, the Music Specialty, was ripe for upgrade to a full-fledged Directorate.

The CAS charged the NAF Music personnel not to limit themselves to parades and military ceremonies but to take a step further to provide creative performances that will project the good image of the NAF and enhance civil-military relations.

Earlier in his welcome address, the Chief of Administration, Headquarters NAF, Air Vice Marshal Kingsley Lar, acknowledged and appreciated the noble gesture of the CAS in approving the establishment of the NAF Pipe Band ensemble to complement the already existing NAF Band.

The gesture, according to him, would remain an indelible achievement of the current NAF leadership. He stated that the NAF Pipe Band Course had almost seemed like a mission impossible ab-initio, bearing in mind that the Pipe band endeavour is not common. 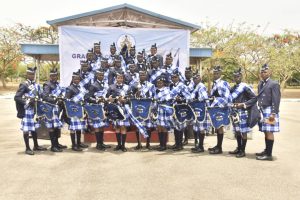 He thanked the CAS for approving the course and providing the equipment, uniforms and accessories for the Pipe Band.

Highlights of the Graduation Ceremony included a demonstration by the graduating students and presentation of certificates and awards to them.

Dignitaries at the event included representatives of the Chiefs of Army and Naval Staff, Directors from the Ministry of Defence as well as Branch Chiefs from Headquarters NAF along with several other senior military officers.