...Suspends Ultimatum to Shut Down Region

The Ijaw Youth Council (IYC), has attributed misappropriation of commonwealth and failure of a proper accountable system as reasons for the set back the Niger Delta Development Commission (NDDC) has suffered in recent times.

The Council made the assertion over the weekend while announcing its suspension of the one-month ultimatum to shut down the region.

The group which further used the opportunity to call for a dialogue with the Federal Government, added that while the ultimatum had gotten the attention of President Muhammadu Buhari, it was necessary to apply wisdom, so as to reduce the economic impacts a shut down might have on the people.

Addressing the press, the National Mobilization Officer, Barr. Dennis Ogbofini, noted that the conference became necessary due to the future of the region.

According to Ogbofini, the Niger Delta region has been the most peaceful region so far and a protest to shut down the economy might result in unwarranted implications such as hijacking of the struggle by miscreants and politicians.

“We call on the youth to reconsider shutting down the region in view of the prevailing security situation of the country. The security situation in the country does not favour protest by a large crowd because it can be hijacked by hungry people or hoodlums who seek to shed the blood of innocent people.

“The IYC cannot create such opportunities for hoodlums and bandits.”

The National Mobilization Officer thus urged youth to instead, shut down offices of their representatives. This he said, was because they (representatives) had the ‘power to stop the budget and ensure the inauguration of the Board.’ 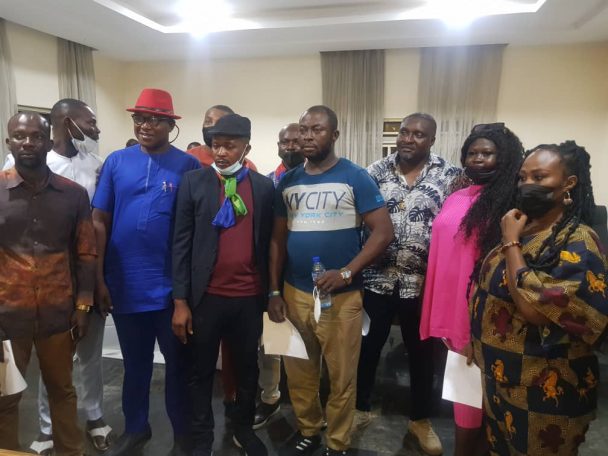 Responding to questions as regards other methods to be used by the IYC in ensuring obligation of their demands, a stakeholder in the group, Mamus Wilberforce said, “shutting down the Niger Delta can never be an option to make peace. Making peace in the Niger Delta is not by shutting it because it affects our mothers in the village and everyone.

“This is why we need wisdom in approaching this issue. We expect the leadership of the IYC to apply wisdom in handling these issues. Why should the region which comprise of 9 states be shut down when we can negotiate?”

Ijaw youths had last month given the Federal Government a one-month ultimatum to inaugurate a permanent Board for the NDDC which would comprise of representatives of the nine states in the region.

While making threats to shut down economic activities in the region, the group complained about the setting up of an interim Board, whose members do not cater for the need of the region.