By Chioma Iruke, The Sight News

Over the weekend, Katung Musa Aduwak’s much awaited debut movie ‘Heavens Hell’, a film laden with psychological and marital issues premiered in Abuja.

The film whose thriller had for a while now been buzzing on social media and fans counting down to its release date did not disappoint as many turned out to watch the seven-year anticipated movie.

Despite the fact that the film was shot seven years ago and release delayed due to internal issues, the themes raised were still exceedingly significant as it has continued to affect the lives of thousands of people around the world. 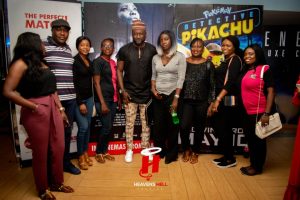 It analyzes the issues faced by real people in a raw form by depicting the lives of the loquacious and miserable Alice Henshaw, the pleasant and compliant Tsola Aliu and their husbands; the affluent and kind Edward Henshaw, and the egotistical and brilliant Jeff Aliu, whose lives were held together by rock-solid friendship and unwavering love, yet laced by betrayal, deceit and a lurking darkness.

Speaking on the expected impact the movie will have on Nollywood, the Director, Katung Aduwak, revealed that it has been all about hard work and determination, for him to finally release the movie that was shot as far back as 2012.

“I am very happy that we just released this piece, It is not my first movie but I am particularly happy about this; I owe this to every member of the crew and the entire staff of One O Eight Media, also the members of Hashtag Media for being more than a reliable partner; this is a win for us and I am very sure that Nigerians will enjoy this film,” he said.

Speaking further on the movie, Aduwak said, “It is meant to show that abuse in marriage is real, mental health is real and people should take it seriously.