by TheSightNews .
in Politics, Security
0

In line with the directives of the Chief of Defence Staff (CDS), General Abayomi Olonisakin, to all Services on the need to ensure peaceful conduct of the forthcoming Gubernatorial and States’ House of Assembly elections, the Chief of the Air Staff (CAS), Air Marshal Sadique Abubakar, has directed Air Officers Commanding (AOCs) and field commanders to ensure safety of lives and properties in their various locations.

This is in addition to the deployment of NAF aircraft, including Intelligence, Surveillance and Reconnaissance (ISR) platforms, to various flash points in support of the Nigeria Police and other security agencies for the peaceful conduct of the elections.

The CAS, stated this during his operational briefing to Principal Staff Officers (PSOs) and AOCs held on Wednesday, at the Headquarters, NAF Abuja.

The meeting also afforded the AOCs the opportunity to give updates on the level of preparedness and the security arrangements put in place for the conduct of the elections in their various areas of responsibilities (AORs). 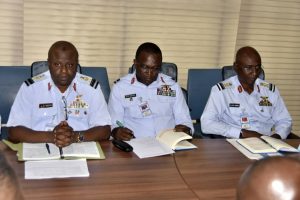 During the meeting, Air Marshal Abubakar, noted that contingency plans have been emplaced in case of any break down of law and order while NAF Hospitals and medical centres have been put on alert to assist in attending to any medical emergencies.

The CAS, emphasized that the responsibility of Commanders is to ensure security of lives and property of Nigerians, adding that no excuse would be tolerated for any failure in this regard.

He also reminded AOCs that they must ensure that all NAF personnel remain professional in the discharge of their duties whilst ensuring that no individual or group of individuals is allowed to undermine the electoral process.

He stressed that NAF personnel must endeavour to operate in accordance with the Code of Conduct promulgated by Defence Headquarters (DHQ) for members of the Armed Forces during elections. 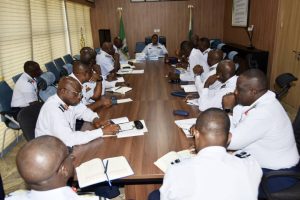 “They must sternly resist any entreaties by unscrupulous politicians to get involved in partisan politics”, Air Marshal Abubakar warned, and therefore urged all eligible voters to come out en-masse to vote for the candidates of their choice.

The CAS also noted that, as part of its constitutional role of providing aid to civil authority, the NAF assisted the Independent National Electoral Commission (INEC) in successfully airlifting a total of 633,790 Kg of electoral materials to 31 different locations across the country from 12 February to 3 March 2019.

He highlighted that eight (8) NAF aircraft were employed in the airlift operation, flying a total of about 340 hours in 257 sorties with about 120 crew members involved, comprising pilots, technicians and other specialties operating on an almost round the clock basis.

Ahead of Int’l Women’s Day, See Five Most Dangerous Places to be a Girl Right Now

Ahead of Int'l Women’s Day, See Five Most Dangerous Places to be a Girl Right Now