Four days after the last inspection tour of the Lagos-Ibadan Railway Project, where the Minister of Transportation, Hon. Chibuike Amaechi expressed displeasure over the slow pace of work in which he mounted pressure on the contractors (CCECC) to speed up the level of work, the Minister has satisfactorily confirmed remarkable improvement from the Ebute-Metta to Apapa axis of the project.

Amaechi, made this known to journalists, Friday, after he embarked on an emergency inspection tour of the area alongside the Chairman of CCECC Group, Zhao Dialong, who was on a visit to the country.

Amaechi said, “The last time we were here, I complained about the fact that they were very slow and when their chairman told me that he was coming to visit, I requested that we go to the project site and see how far they have gone.

“There is remarkable progress from the day we came till now. If you look at the roof work at the stations they have completed it in just three to four days and If they continue with that kind of speed, we should commence activity on the track in earnest. Mind you, If we saw the number of workers that we saw today, we wouldn’t have complained”.

Obviously, the contractors (CCECC), had between last Monday and today redoubled their efforts by engaging more hands to speed up the pace of work on the project and achieve the present level of job completion.

The Minister said, “moving forward, we have been saying that they should add to their manpower and deploy more equipment to commensurate with the volume of work on ground”.

“Going from here to the seaport, you’ll notice that there is a remarkable improvement, this means that something was initially wrong before the arrival of their chairman. I think, I need to meet with their chairman and have a holistic conversation on how to move forward”, he said. 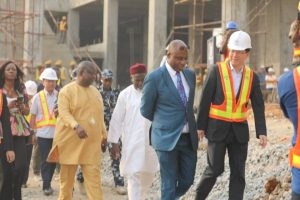 He added that although work was progressing steadily, much was not really happening at the seaport at the moment but that the contractor had assured that work would be intensified from the week ahead.

In his words, “Not much is happening at the seaport, but they have promised that from next week they will intensify activities.

On whether the completion date of the project was still feasible considering the improvement noticed, the minister noted, “As far as I am concerned (mentally) , I’m almost out of Lagos. I’m critically trying to focus on Kano-Kaduna, Ibadan – Ilorin, Ilorin to Minna and then to Abuja.”.

On the legal implications of not meeting up with the contractual terms of the project in terms of its completion, Amaechi opined that rather than looking at the law, emphasis should be on the practicality.

According to him, “The issue about noncompletion of the project at the stipulated time frame is complex, the original time for the expiration of the contract is May, but you see, they made an argument which you cannot also fault, the argument they made was for additional works which gave them up to six months, so if you add the six months to the May expiration date, you are probably talking about next year. So, instead of looking at the law, we should look more on practicality and compel them to speed up the pace of work” he stressed.

For his part, the Chairman, CCECC Group, Zhao Dialong said changes in project location affected completion of the stations and tracks, adding, “We initially designed the projects so that the tracks will be done simultaneously with the stations, we even planned to finish the stations first, but we failed because of changes in location “,he explained.