In his quest to ensure speedy completion of the entire Lagos-Ibadan rail line, the Minister of Transportation, Hon. Chibuike Amaechi has said that attention will now be shifted to the Ebute-Metta -Apapa route, following a 100% completion of the railway tracks from Ebute-Metta to Ibadan axis.

This according to him, will help to increase the pace of work on the construction of major stations and timely resolve of the challenges that may impede construction work on that route.

Amaechi who was accompanied by the Oyo State Governor, Seyi Makinde on the inspection tour of the project said this on Monday in Omi-Adio, Oyo State.

The Minister noted that, “Not much has happened at the Abeokuta station, the worst is from Ebute-Metta to Apapa. To sum it up, it is painful and now, our focus will be shifted to that area”.

Amaechi further said that he would schedule a meeting with the management of Nigeria Port Authority (NPA) so as to find lasting solution to the challenges encountered during construction on the Ebute-Metta to Apapa route.

He explained that the slow pace of work in some stations by the contractors—CCECC was as a result of challenges in clearing materials meant for the stations at the Apapa Port.

He noted also, that some minor stations along the rail line have been completed just as the major stations were progressing steadily.

“It’s a mixed bag, in some stations, we are impressed, in others we are not. The last time we came here, we had to suspend work because they were using what we referred to as stone dust.

“Again, the second excuse they gave was that their vessel is still at the sea port. We hope to address this situation when we meet with NPA, as we are really committed to completing this project as soon as possible”, he said.

Meanwhile, the Oyo State Governor, Seyi Makinde had said that the ongoing project was a wake up call for the state to brace up and do the needful in order to make the project seamless success. 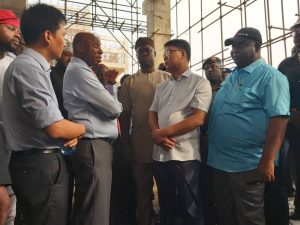 He said that the project would decongest Lagos and improve the economy through job creation to the people, adding that the state government would assist in the area of road construction and security.

In his words, “I can say that so far so good, work is going on and a lot of effort is being put into it. A lot has been achieved so far and a lot still has to be done.

“The rail will boost our economy and people can work in Lagos and live in Ibadan. Students can attend our schools here. So, it will decongest Lagos and help improve our own economy.

“We will look into other things that will make the rail operation smooth like the construction of roads and provision of adequate security”, he said.

The Minister was accompanied by the Oyo State Governor, Seyi Makinde, as well as the Minister of State for Transportation, Hon. Gbemisola Saraki and other top government officials to inspect the pace of work, especially on the train stations on the Lagos-Ibadan rail line.