Following the abrupt suspension of the three-months free train ride on the Lagos-Abeokuta rail line, the federal government has apologized to Nigerians.

The Minister of Transportation, Hon. Chibuike Amaechi, who tendered the unreserved apology to Nigerians on Friday, said the suspension was done by the project Contractor, China Civil Engineering Construction Corporation(CCECC) due to safety reasons during the 2019 elections.

Recall that the Federal government on February 8, 2019 flagged off a three-month free train ride which started running from Saturday February 9, with three trips—morning, afternoon and evening to convey passengers, while work continued from Iju to Ebute Metta down to Apapa.

Ameachi, who spoke to Journalists during the routine inspection tour of the Lagos-Ibadan railway project, hinted that the free train ride will resume soon. 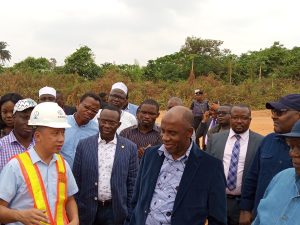 According to the Minister, “The Lagos-Abeokuta free train ride was suspended by the Chinese when they left during the 2019 elections and the excuse they gave was that they cannot allow it run because of safety since they have not completed the second line.

“They said because of the elections most of them left the country and they are just returning and they will increase the speed as they have resumed. It is company procedure for them to leave.

“You have seen that they have nearly completed the second line from Iju to Abeokuta and after that I will insist that they resume because we promised Nigerians.

“I want to apologize to Nigerians that they had to stop when they left the country because of elections. I didn’t envisage that and now, I think they should go back”, he remarked.

While giving update on the Lagos-Ibadan railway project, he stated that the government is pushing for the civil works to be completed before the rains, adding that the CCECC has promised to increase the pace of work.

“We are pushing now that they must complete civil works before the rains and they have promised that by the time we come on the 28th of March, they would have gone far with these civil works.

“Some areas they will complete to what they call MC1 level before they lay the tracks. They’ve promised that by March 28, they should be able to get to Kilometer 95 in track laying. We are pushing so that by the first to second week in April, they should be very close to Ibadan with track laying”, he noted.

Amaechi, however disclosed, that unforeseen challenges which have been encountered in the course of the construction has changed the initial figures for the project, adding that they will go back to cabinet to seek for approval.