ABUJA: Two persons have been declared missing and several others injured as Organised Labour Movement and supporters of the Minister of Labour and Employment Dr Chris Ngige on Wednesday clashed in Abuja.

Members of the Labour Movement in their droves marched to the residence of Dr. Chris Ngige in the early hours of Wednesday, over his refusal to appoint Chief Frank Kokori as the Chairman of the Nigerian Social Insurance Trust Fund (NSITF). 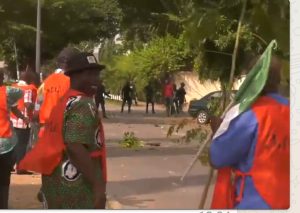 The Organised Labour Movement had on Tuesday vowed to make the industrial space uncomfortable for the Dr. Ngige, noting that his refusal to inaugurate the NSITF board and the National Labour Advisory Council(NLAC) has increased the burden of the Nigerian workers.

They further stressed that they were going to picket any facility where Dr. Ngige can be found.

However, the picket didn’t go as planned as they were pelted with stones and other harmful objects by thugs allegedly in support of the Minister.

According to Ayuba, “We went in peace and never knew that they meant harm for us and it is really unfortunate in a democratic process that people will use maximum force on us.

“I hope Mr. President has heard and has seen what has happened, the way Nigerian workers are treated. It is our fundamental right to peaceful picket and nobody can take that away from us”, he said.

For his part, the president, Nigeria Union of Petroleum and Natural Gas Workers (NUPENG), Comrade Akporeha Williams, disclosed that two members of NUPENG cannot be accounted for after the clash. 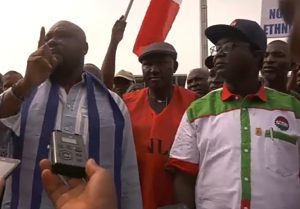 In his words, “Two tanker drivers that drove tankers there, as we speak, we cannot account for them and if by 6 PM today we don’t see our members, NUPENG will declare a nationwide action from tomorrow.

“If we don’t see our members that have been hijacked by Dr. Ngige; he sent his thugs to come and kill us and as we speak we can’t reach two of our members both on phone and if we don’t hear from them by 6 PM, we will shut down all operations around the country”, he reiterated.

Recall that President Muhammadu Buhari had appointed Chief Frank Kokori as the NSITF Board Chairman since 2017 but the Minister has declined inaugurating the Board.