Kidnapping on Abuja-Kaduna Highway: NAF to Provide Air Support to Police, Others

As part of inter-agency cooperation to address security challenges in the country, especially the issue of kidnapping and armed banditry along the Abuja-Kaduna Highway and Kaduna-Birnin Gwari axis, the Nigerian Air Force (NAF) has reiterated its commitment to support the Nigeria Police, Department of State Services (DSS) and other security agencies with real time geospatial and imagery intelligence whilst making available its air assets for the conduct of tactical air support missions and increasing the frequency of air reconnaissance in the affected areas.

The IGP and DG DSS on arrival at HQ NAF immediately went into a closed door meeting with the CAS before undertaking a guided tour of facilities at the newly established, state-of- the-art Geospatial Intelligence Data Centre (GIDC) and Strategic Air Operations Centre (SAOC).

The GIDC, which is equipped with high-tech computer hardware and software, was established to enhance the acquisition, analysis, interpretation and exploitation of imagery and geospatial information to provide actionable intelligence for the Armed Forces and other security agencies, while the equally well-equipped SAOC is expected to greatly enhance the coordination of air operations in support of internal security operations across the Country.

While inspecting the facilities, the Acting IGP expressed delight and satisfaction with the cutting edge technologies and sophisticated computer software at the Centres. 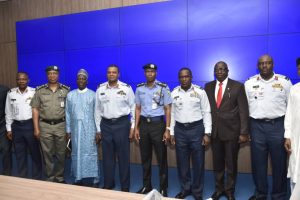 He said the essence of the visit to the CAS was to explore possibilities of using NAF air assets and the products of the GIDC to improve the effectiveness of operations to deal with issue of kidnapping and armed banditry, especially along the Kaduna-Abuja Highway and other parts of the country including Kaduna, Zamfara, Katsina, Niger and Kogi States.

According to him, as a result of the onslaught by security agencies against the armed bandits in Zamfara State, the criminals had moved towards the Abuja axis to carry out their nefarious activities.

“I felt that as a security agency, we need to synergize with other security outfits. We don’t have the air capability but the NAF has them. With this we can have a joint operation to deal with this security issue”, he said.

The IGP appreciated the CAS for making NAF air assets available for the operation and also availing the NPF and DSS of the capabilities of the GIDC and SAOC.

He also congratulated him for emplacing such facilities and making them available to other security agencies to enhance internal security operations for the benefit of the Nigerian people.

Over 30,000 Displaced Persons Living In Inhumane Conditions in Borno