It was drama on Monday morning, first day of work in June, as workers of the Securities and Exchange Commission (SEC) shut down offices at the headquarters of the commission in Abuja.

The Sight News gathered that the shut down was in protest over attempts to reinstate the suspended Director General, Mounir Gwarzo. 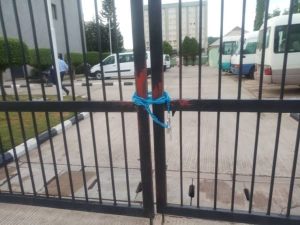 Recall that the National Industrial Court, Abuja, had on Thursday ordered the immediate reinstatement of Gwarzo to his position.

Gwarzo was indicted for abuse of office and corruption by an administrative panel of inquiry set up by the Federal Ministry of Finance headed by the permanent secretary, Dr. Mahmoud Isa-Dutse.

Justice Sanusi Kado, in his judgment, held that the minister of finance, named as the second defendant in the suit, lacked the power to suspend the claimant.

Justice Kado, who dismissed three issues raised by defence counsel through their preliminary objection, ruled that the suit was not status barred.

Kado further held that the issue in dispute was not about the position of the claimant as SEC DG; the bone of contention was who had the power to suspend him.

The judge stated that the second defendant (minister of finance) did not have the power to suspend the claimant since he was not an employee of the commission.

He said that the minister, in the absence of the board, only had supervisory power, which does not include disciplinary power to suspend the DG.

Kado held that it was only the permanent secretary in the ministry of finance, on the directive of the president, who had the power of suspension.

“The minister’s role was that of recommendation”, he emphasized.

Additionally, he stated that the administrative panel of inquiry that indicted the claimant was not a court of law; neither was it a quasi-judicial body, but just a body set up for a fact-finding duty.

He, therefore, declared that the suspension of the claimant was null, void and of no effect.

Kado, also declared that the recommendation of the administrative panel of inquiry set up by the second defendant, be set aside.

The judge then ordered the reinstatement of the claimant as the DG to complete his five-year tenure.

He further ordered that the claimant’s salaries, allowances and entitlements accrued should be paid to him in full.

The House of Representatives Ad-Hoc Committee which investigated his suspension by the former minister of finance, Kemi Adeosun, also indicted him.

The protesting workers took the action under the umbrella of the Association of Senior Civil Servants of Nigeria.