The President of Italy, Sergio Mattarella on March 4, 2021 lauded the achievements of Bangladesh when the Bangladesh Ambassador to Italy Md. Shameem Ahsan presented his credentials at a ceremony at the Quirinal Palace, official residence of the Italian President.

A Guard of Honour by a military contingent preceded and followed the presentation ceremony, where the President warmly welcomed and congratulated the new Ambassador of Bangladesh and assured all-out support during his tour of duty.

While thanking the President for receiving him and giving his audience, the Ambassador conveyed him the greetings and best wishes of the President and Prime Minister of Bangladesh.

Bangladesh Ambassador briefed the Italian President about the development journey of Bangladesh under the leadership of the Prime Minister Sheikh Hasina which turned the country to a “role model” among the developing countries. 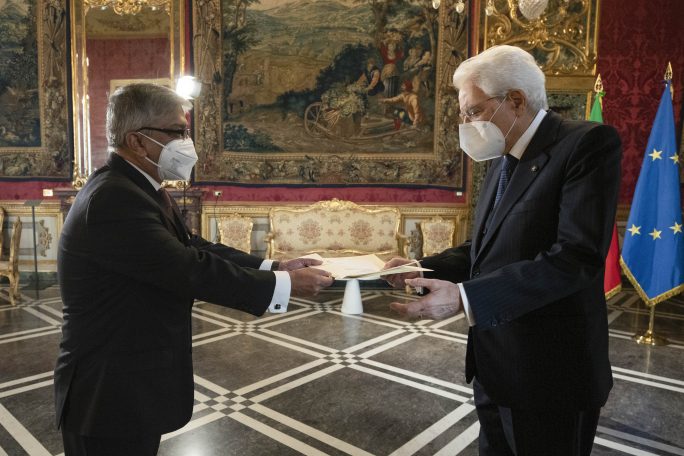 The Italian President listened to the success stories with deep interest and pointedly mentioned that he is well aware about the stunning successes of Bangladesh and he stressed on stronger ties between the two countries in the coming days. President Mattarella was highly appreciative of the Bangladesh vibrant community in Italy whom he termed hard-working and lauded their contribution in the country.

The Ambassador thanked the Italian Government for recent inclusion of Bangladesh under the Flussi Decree in 2020 which paves the way for seasonal and non-seasonal workers from non-EU countries.

Italian President deeply appreciated Bangladesh’s extra generosity for hosting 1.1 million Rohingya refugees in response to the Ambassador’s appreciation of Italy’s constructive stance at the UN and other international forums on the issue.

While observing that bilateral relations have grown stronger and durable over the years, both sides noted with satisfaction the decision of joint celebration of 50 years of the establishment of the diplomatic relations in 2022 as agreed during the official visit of the Prime Minister Sheikh Hasina to Italy in February, 2020.

Pandora Chowdhury, wife of the Ambassador, Sikder Mohammad Ashrafur Rahman, Counsellor (Political) and Md. Arfanul Hoque, Counsellor (Labour Welfare) accompanied the Ambassador at the ceremony while high officials of the Italian Government were in attendance.

A career diplomat, Ahsan served as High Commissioner of Bangladesh to Nigeria before his new assignment in Italy.

Earlier, he served in Bangladesh Missions in New York, Washington DC, Rome, Nairobi, Doha and Kuwait in addition to various positions at the Ministry of Foreign Affairs, Dhaka.