by TheSightNews .
in Real Estate, Security
0

The Chief of the Air Staff (CAS), Air Marshal Sadique Abubakar has charged personnel of the Nigerian Air Force (NAF) to increase their commitment towards ensuring improved security of lives and properties of Nigerians across the country.

The CAS, who stated this during the commissioning of a newly constructed block of 18 x 2 bedroom Senior Non-Commissioned Officers’ (SNCOs’) Accommodation at the NAF Base in Kainji, Nigeria State, said, while NAF personnel have, no doubt, made immense sacrifices in the prosecution of internal security operations in some parts of the country,  more effort was still expected of them. 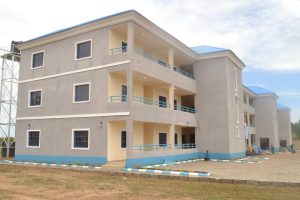 He specifically stressed the need for personnel to give their all, which is the only acceptable level of effort worthy of the support and goodwill Nigerians have bestowed on the Service.

The CAS, who was represented by the Chief of Administration, Air Vice Marshal Kingsley Lar, also urged the occupants of the accommodation to utilise the facilities with a high sense of care and maintenance, assuring them that the Service would continue to embark on projects designed to ensure the comfort of its personnel and their families. 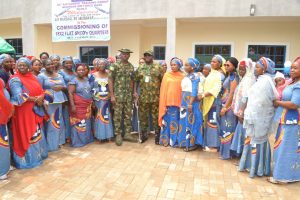 According to him, this particular project would go a long way in enhancing professional performance of aircraft technicians, who labour tirelessly, day and night, carrying out both scheduled and unscheduled maintenance on the Alpha Jet aircraft to keep them air worthy and combat-ready, thus providing the needed security for the country.

He therefore urged all officers and men to continually exhibit the highest level of discipline and professionalism in the conduct of their duties.

The CAS also used the opportunity to express the profound appreciation of NAF personnel to the Commander-in-Chief of the Armed Forces, President Muhammadu Buhari, for his unquantifiable support to the Service.

He also thanked the host community and their traditional leaders for the cordial relationship and support enjoyed by the NAF.

Earlier in his remarks, the Acting Commander 407 Air Combat Training Group, Squadron Leader James Bako, lauded the relentless commitment of the current NAF leadership to providing the necessary infrastructure and facilities which have enhanced personnel’s effectiveness and efficiency in the performance of assigned roles.

Dignitaries present at the occasion included heads of security agencies in Kainji as well as the representative of the Emir of Bongu.