Imo State government has warned leaders to desist from arming youth of the state.

According to him, part of the problem is that some of the youths armed by some of the leaders have become uncontrollable.

“I am aware that some of the youths causing trouble here were armed by some of the leaders. One of the dangers in arming any youth to do your bidding is that at some point he would become too strong for you to control and he would be doing his own bidding. 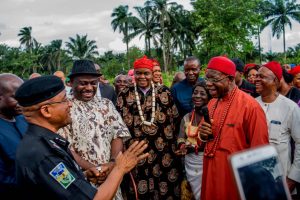 He promised that Imo State Government will restore peace in the war-torn community, even as he called on the people of the area to support the efforts of Government.

“The state government under His Excellency, Rt. Hon. Emeka Ihedioha will ensure that Agwa is safe for the people and conducive for business and government investment”, he said.”We shall take over this Police Station and complete it and put security here so that the people and whatever investment we make here shall be safe.”

“These people are very resourceful, but when you have a group of youths that are unemployed you would have this kind of situation”, he noted.

He however called on the youths to drop their arms and give the government a chance to develop the place, promising that the state government has great plans to engage them.

“Those who want to go to school would do so and those who want to learn one trade or the other would have a conducive atmosphere to do so. We shall set up industries and empower you meaningfully. Under the Governor Ihedioha administration, we shall provide electricity here.”

Also speaking, Imo State Commissioner of Police, Rabiu Ladado assured that the police will restore peace and order in Agwa, promising that the state command would intensify security presence in the area.

“This clan has a record of high rate of crime, but we shall move quickly to address the situation. We shall have interim measures to restore sanity in this place. From today, we shall improve Police presence here. We will establish SARS, Anti-Cultism or Anti-Kidnapping here, pending the actualization of the divisional police.”

He lamented the high rate of criminality in the area, saying that the activities of criminals were beyond what they could control.