Under the agreement, Tiwa’s future music will be released internationally through UMG’s operations in more than 60 countries worldwide.

The Projects will be executively produced by Efe Ogbeni of Regime Music Societe and Vannessa Amadi-Ogbonna. 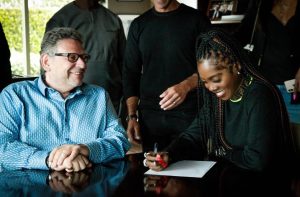 Tiwa, an artist whose success spans music, fashion, film and television, has performed around the world, including a notable performance at Jay Z’s “Made In America” festival in Philadelphia in 2017.

According to her, “My biggest goal is to make Africa proud. I’m so excited for this moment and I’m thankful to Sir Lucian Grainge and my new UMG family for their belief in my dreams. I’m looking forward to this next chapter in my career and I’m more ready than I have ever been.”

In his words, Adam Granite, EVP Market Development, Universal Music Group said, “We are looking forward to partnering with Tiwa and her team to help her music reach new audiences around the world.

“As one of Africa’s most successful, influential and dynamic singer-songwriters, Tiwa has truly global ambitions and UMG is committed to help her in achieving them.”

Also, Don Jazzy, the CEO of Mavin record, which Tiwa was signed to over the past 7 years, took to his Twitter handle to congratulate Tiwa and thanked her for being in Mavin for the past seven years.

On her part, Tiwa retweeted the picture with the words, “It’s beyond a contract. I’m a Mavin for LIFE”.

It’s beyond a contract, I’m a Mavin for LIFE ❤️ https://t.co/RojmlHUBps

The Sight News wishes Tiwa a successful career ahead as she steps into a new phase.