KATSINA: The Federal Government of Nigeria on Tuesday flagged off the $1.959 billion Kano-Katsina-Jibya-Maradi rail line which is expected to serve about 80 million people across 10 states.

The rail line that traverses the major commercial and administrative centre of Kano and passes through other economic hubs of the country including Kazaure, Daura, Katsina and up to the border town of Jibiya and the Niger Republic city of Maradi, is being handled by Messrs Mota-Engil Nigeria Limited.

The type of contract for this project is the Engineering, Procurement, and Construction (EPC) contract and the duration for the project is expected to be 36 months (three years) after design and Environmental and Social Impact Assessment (ESIA).

Speaking at the groundbreaking ceremony of the Kano-Maradi standard gauge rail line which held in Katsina, President Muhammadu Buhari, said the rail line has been identified as a viable line that will significantly enhance the movement of passengers and freight to the hinterland especially raw materials from both agricultural and mineral resources for our industries.

He also stated that the connection to Niger Republic through rail will foster Trans-Sahara trade and contribute to the expected gains in the African Continental Free Trade Area Agreement (AfCFTA). 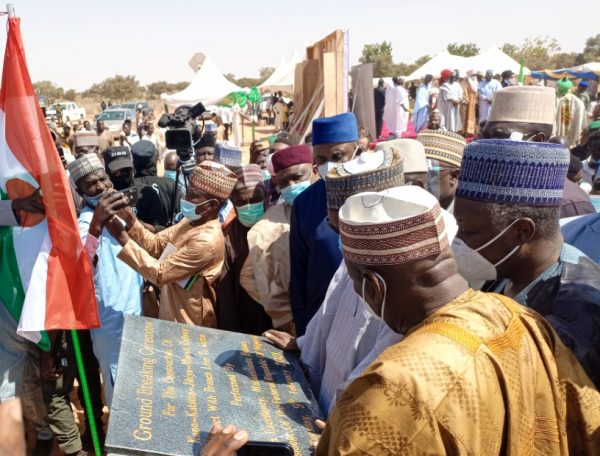 According to him, “The cities of Jibiya and Maradi constitute a significant trading core between Nigeria and Niger Republic – a tradition dating back many centuries. This vital infrastructure line will establish an end-to-end logistic supply chain in railway transport services between Northern and Southern regions of the country, reaching Nigerian southern ports of Lagos and Warri.

“The entire route encompasses territory inhabited by close to 80 million people across 10 states of the country. This project has a branch line to Dutse the capital of Jigawa state to open up this corridor which is endowed with vast resources”.

Furthermore, he noted that the project, when completed, would serve import and export of goods for Niger Republic and other countries in the sub-region through Nigerian ports. “The country would earn revenue through expansion of trade and commerce, while the people of Niger Republic will benefit from ease of transportation logistics at affordable cost in their import and export business”, he said.

While noting that after completion, businesses will be able to take full advantage of availability of an affordable and effective transportation backbone that can transform industrial and economic activity to a higher level, he enjoined private sectors to invest and participate in the realization of these very promising economic opportunities.

In his welcome address, the Minister of Transportation, Hon. Chibuike Amaechi, remarked that the project will reach a substantial completion in 2023 when it will be ready to handle passenger and freight daily traffic forecasts of 9,364 passengers and approximately 3,000 metric tons of freight on return trips between Kano and Maradi.

He expressed confidence that the route when linked with the ongoing Lagos – Kano railway project on completion, will generate higher traffic volumes and revenue.

He further stated that the entire network of this project has fifteen (15) railway stations of different categories with major stations of approximately 3,000 peak passenger capacity in cities of Kano and Katsina and stations of standard category in Kazaure, Daura, Jibiya and Dutse and minor stations in Dambatta, Shargelle and Mashi as well as halt stations in Kunya, Kano airport, Muduru, Dadara and in Niger Republic at Annol Mata and Maradi.

In his words, “The scope of this project having its corridor within Kano, Katsina, Jigawa states and a 25Km extension into Niger Republic, involves construction of single track standard gauge rail line with an alignment of approximately 284Km traversing Kano – Dambatta – Kazaure – Shargelle – Mashi – Daura – Katsina – Jibiya – Maradi and a 94Km branch line from Kano to Dutse, the capital of Jigawa State.

“The construction project is going to be handled by Messrs Mota-Engil Nigeria Limited with the support of European Export Credit Agencies and Development Finance Institutions and the involvement of local capacities and resources in line with the Presidential order on local content”, he disclosed.

For his part, the Niger Transport Minister, Hon. Sadou Seydou, expressed his pleasure for the groundbreaking ceremony which he said, is an important project for both countries as it will move development and achieve peace and security in the border area.

He noted that the project will help develop especially Niger republic as it will contribute to transport infrastructure as well as free movement of people and goods across the border.

Also speaking, the Mota-Engil CEO Africa, Manuel Mota, stated that it is an honour for Mota-Engil Africa to have been selected for the construction and execution of the Kano-Katsina-Jibya-Maradi line.

He said the rail line is a big achievement to unlock trade and bring economic development and prosperity, and guaranteed that Mota-Engil will complete the project on time, on budget and with great success for the benefit of Nigeria and the Niger Republic.