The Chief of the Air Staff (CAS), Air Marshal Sadique Abubakar, has assured the Government and people of Adamawa State that the Nigerian Air Force (NAF), in concert with sister Services and other security agencies, would continue to work tirelessly to ensure security in the State.

The CAS gave this assurance Monday, March 2, 2020, while on a visit to the Adamawa State Governor, His Excellency, Alhaji Ahmadu Umaru Fintiri, at Government House Yola.

The CAS, who was represented by the NAF Chief of Training and Operations, Air Vice Marshal (AVM) James Gwani, also seized the opportunity to commiserate with the people of the State over the unfortunate loss of lives during the terrorists’ attack at Garkida town on 21 February 2020. While praying for the peaceful repose of the souls of the departed, Air Marshal Abubakar prayed that the Almighty God would continue to comfort the families of the deceased. 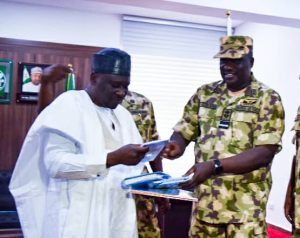 Speaking further, the CAS noted that he was at the Government House to discuss ways of further boosting the operations of the NAF in Adamawa State. This, he said, would include the establishment of an additional Forward Operating Base (FOB) in the Northern part of the State as soon as approval is granted.

In his response, the Adamawa State Governor commended the NAF for its efforts in ensuring the safety and security of Nigeria and Nigerians. He said his Government would continue to collaborate with the NAF and other security agencies to ensure security in Adamawa State.