Former Nigerian Head of State and elder statesman, Gen. Yakubu Gowon, has said that Nigeria’s foremost young literary expert, Chimamanda Ngozi Adiche was distorting Nigeria’s history by her narration of the happenings of the infamous Biafra war that happened 50 years ago.

The Nigerian civil war (also known as the Biafran War} was a Civil war in Nigeria fought between the government of Nigeria and the secessionist state of Biafra.

Biafra, represented the nationalistic aspirations of the Biafran people, whose leadership felt they could no longer coexist with the Northern dominated federal government.

Chimamanda, in her book “Half of a Yellow Sun”, depicted the Nigerian forces as brutal and unforgiving as they ravaged through homes, burning down houses while shooting and manhandling unharmed civilians. The award winning book was also made into a Box Office Hollywood movie, earning millions of dollars in cinemas across the world. 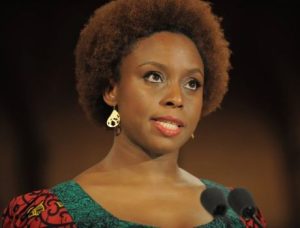 In an exclusive interview to commemorate the 50th anniversary of Nigeria’s first and only civil war which lasted for 3 years from 1967-1970 and resulted in the death and displacement of millions of civilians, mostly of Igbo extraction, Gen. Gowon stated that Chimamanda’s narration of the war was not entirely correct.

In her book”Half of a Yellow Sun”, Chimamanda had depicted Nigerian forces as brutal and menacing, prosecuting the war with no respect for human rights or lives. As at the time of the war, Gen.Yakubu Gowon was head of state.

In his words: “Amanda and others like her are very wrong in their description of the events that happened during the civil war. She wasn’t born at the time, so she cannot claim to be speaking authoritatively on the subject matter. Our soldiers then were extremely disciplined, there is what we call ‘Code of conduct’ in the army and rules of engagement guiding the military. 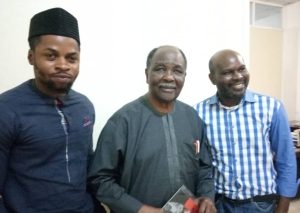 “A very key part of those rules states that; you cannot shoot or harm in any way, an unarmed civilian or even an unarmed enemy soldier for that matter. How then can she claim that her forebears were brutalized and tortured by the same forces that were sent to maintain order and ensure we remain a united nation and not a divided entity?

“People her age weren’t even born during the war, she probably heard stories passed down and adulterated, and then based all her conclusions of the happenings of that period on hear-say,” he emphasized.

Gen. Gowon then went further to explain how the 3-year war was fought, and why he declared ‘No victor, no vanquished’

“We didn’t prosecute the war as though we were fighting our enemies, we fought the war as a last resort. We first started by using the police as a first respondent, but when the situation got out of hand and the rebel forces started taking over government establishments in the east, we had to take action to ensure and guarantee the future of this country,” he said.

When asked about why the war started, he stated that the war began as a result of different understanding of the Aburi Accord.

“The disagreement came from the different interpretation of the Aburi Accord, which lead to a lot of political disagreement and differences. When Ojukwu came and said ‘On Aburi Accord we stand’, I said no, ‘on Aburi you fall’. The civil war happened because of the different interpretations both parties—Nigeria & Biafra had on the Aburi Accord, despite all our efforts to come to a common ground, unfortunately, the war broke out.

“The civil war we had to reluctantly go into, came about as a result of various disagreement on many issues going back into Nigeria’s history, to the time of the first military intervention. Various political attempts were made to solve the problem, like the signing of the Aburi Accord and the problems that arose from the interpretation of what Aburi really meant.

“Ojukwu said, ‘on Aburi we stand, and I said no, on Aburi you will fall…’, that was probably the beginning of the war, because they were trying to interpret it the way they wanted and were trying to force the rest of us to accept it their way and we were saying that we also have our own way of resolving the issue.

“When the war eventually ended, my administration made giant steps to rebuild the war torn Biafran side. We didn’t take any prisoners of war, neither was any soldier from the Biafran side tried or prosecuted. We created a program to reabsorb them, we began rebuilding schools, hospitals and homes for the displaced people.

“After seeing the effect of the war on the people, and the pains it brought, I decided to put in place measures that will ensure our country doesn’t disintegrate into a situation like that again. We created Unity schools across the country, divided the big states into smaller states so that no one state could hold so much power again.

“Then we created the National Youth Service Corps, to take young people from one part the country to another in the hope of fostering unity, creating friendships and building relationships that will help nation building.

“If you look around today, you will see so much good being done by youth corpers across the country,” he ended.