The Chairman Senate Committee on Air Force, Senator Duro Samuel Faseyi, has commended the Nigerian Air Force (NAF) for its prudent management of resources which has resulted in many laudable achievements under the leadership of the Chief of the Air Staff (CAS), Air Marshal Sadique Baba Abubakar.

This was disclosed on Thursday, during the defence of the 2019 NAF budget proposal before the Senate Committee on Air Force.

In his opening remarks, Senator Faseyi highlighted that the desire of the 8th National Assembly (NASS) for thoroughness and transparency informed its decision to suspend plenary and other legislative engagements to give attention to the 2019 Budget to ensure due diligence before its passage.

He remarked that air forces all over the world were very expensive to maintain but he was aware that the NAF and indeed the entire Armed Forces have been persistently underfunded.

Senator Faseyi, said he was delighted that despite these budgetary challenges, the NAF had been able to make giant strides in the areas of training, acquisition and reactivation of platforms as well as the enhancement of personnel welfare through provision of conducive office and residential accommodations, which has improved the morale, motivation, job satisfaction and combat readiness of NAF personnel.

He stated that the Committee was proud of the robust synergy, collaboration and cooperation between the NAF leadership and the NASS which had facilitated these laudable achievements, noting that one of the major achievements of the Senate Committee on Air Force in the 8th Senate was the successful passage of the Air Force Institute Technology (AFIT) Bill, which will ensure more efficient functioning of the Institute whilst providing relief to the NAF.

In his remarks, the CAS thanked the NASS leadership, especially the Senate Committee on Air Force for providing necessary legislative support to the Service for the effective performance of its statutory roles.

He stated that the NAF has continued to project air power in defence of Nigeria’s territorial integrity while also providing assistance to civil authority, when called upon. He noted also, that the NAF was involved in several internal security operations to deal with terrorism, armed banditry and other forms of criminality in the Country.

The CAS further highlighted some of the key achievements recorded during his tenure, including the increase in the serviceability of flyable aircraft from about 33 per cent in July 2015 to the current rate of between 78 and 82 per cent. 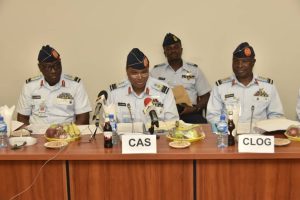 According to him, “this has facilitated the conduct of over 43,000 sorties of about 57,000 hours within the period for various operations”. Air Marshal Abubakar also highlighted that 22 new aircraft had been inducted into the NAF fleet and 13 previously unserviceable aircraft reactivated, with another 8 currently being overhauled.

Speaking further, the CAS noted that the NAF would soon take delivery of two Agusta 109 Power attack helicopters as well as another Mi-35M helicopter gunship, whilst the in-country Periodic Depot Maintenance (PDM) on the C-130 would also be completed in a few weeks.

These, he said, were aside, the 3 new commands and several units that were established during the past 4 years to enhance NAF’s operational capability and bring security closer to the people.

These include new units in Nguroje in Taraba State, Agatu in Benue State, Doma in Nasarawa State, Bauchi in Bauchi State, Gusau in Zamfara State and Daura in Katsina State, among others. He stated further that the NAF had undertaken massive recruitment to ensure the right manpower disposition to meet the emerging security challenges.

“This administration has commissioned a total of 669 officers and recruited 7,693 airmen and airwomen. Presently, another 206 officers are in training while the NAF plans to recruit about 2,000 airmen/airwomen this year”, he said.

The CAS added that force protection and force projection had also been significantly boosted with the training of about 4,000 Regiment and 1,000 Special Forces personnel both locally and abroad.

Air Marshal Abubakar equally highlighted that, in providing aid to civil authority, the NAF had assisted the Independent National Electoral Commission to airlift electoral materials to 31 different locations in the Country. All of these, he said, were as a result of the immense support received from the NASS.