ABUJA: The Bangladesh High Commission in Nigeria on Friday, March 26, 2021, marked the 50th anniversary of Independence and National Day of Bangladesh in Abuja, Nigeria.

Recall that it was on March 26, 1971, that Sheikh Mujibur Rahman, the country’s founding father, declared independence from Pakistan.

Speaking at the anniversary reception which took place at Transcorp Hilton Abuja, the Bangladesh High Commissioner to Nigeria, Mr. Masudur Rahman in his welcome address, saluted the martyrs who led to the independence of the country, adding that as they celebrate, there are reasons to speak proudly of the achievement Bangladesh has made as a people of a free country. 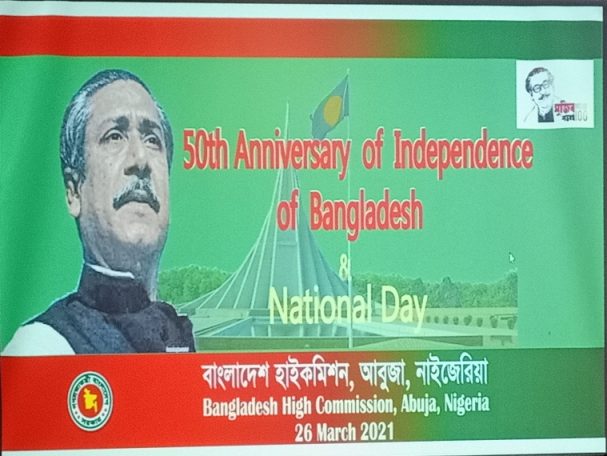 Rahman while noting that Bangladesh has evolved, said the country is the 35th largest economy in the world with per capita income that has surpassed over $2,000 and poverty rate of about 12-14 percent.

He stated that the present Government has rendered untiring effort in materializing Bangabandhu’s dream, and have achieved success in poverty eradication, health, human resource development, elimination of gender inequality and low poverty rate. 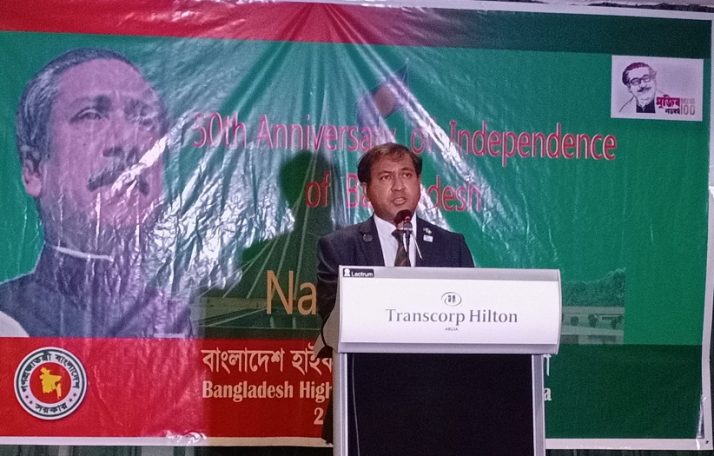 In his words, “Today, Bangladesh is self-reliant in food production. Despite the Covid-19 pandemic, the government has been able to maintain the economic growth as the country ranked fourth in South Asia in the covid resilience rate. Bangladesh achieved 5.2 percent GDP growth rate despite Covid-19 and has been a global role model for poverty alleviation”.

He further remarked that Sheikh Hasina is determined to build a knowledge-based country, adding also that Bangladesh has become a destination for foreign investment.

While speaking on the relationship of Bangladesh and Nigeria, he said the two countries enjoy cordial bilateral relations, and expressed confidence that the close ties between the two countries will witness further improvement in the coming days.

He emphasized that Bangladesh attaches great importance to its relation with Nigeria, and pledged to work together with Nigeria to push their bilateral relation to a new height.

For his part, Nigeria’s Minister of Foreign Affairs, Geoffrey Onyeama, said Nigeria and Bangladesh has maintained a long standing cordial relations over the years, and the two countries have made efforts to foster trade relations as Bangladesh is the leading country in textile.

Onyeama, who was represented by Ms. Aisha Dewa, Director, Asia and Pacific Division, said in the area of culture, the two countries will continue to promote programmes that will enhance people-to-people and cultural interaction.

In the area of Defence, he added that the two countries have sustained cordial military relations that have led to establishment of partnership between Nigeria and Bangladesh.

In his words, “The existing cordial relationship with Nigeria and Bangladesh will be leveraged to deepen defence relations in years to come. Nigeria is committed to strengthen Relations with Bangladesh in the areas of Trade and investment, Agriculture, Education and Culture.

“No doubt that Nigeria and Bangladesh will continue to build on the successes recorded so far while we forge new ties in the areas of Trade and investment”, he said.

He expressed hopes that the relations will be consolidated by the mutual benefit of the two countries in years to come.