Bangladesh Embassy in Rome observed the Historic 7 March, recalling the epoch-making speech of the Father of the Nation Bangabandhu Sheikh Mujibur Rahman, given on March 7, 1971 with great enthusiasm. The event was held on a digital platform.

The programme which began with the hoisting of the national flag at 9:30am at the Chancery, was followed by placing of floral wreath on the portrait of the Father of the Nation, Bangabandhu Sheikh Mujibur Rahman. Also, one minute silence as a token of respect to all martyrs of the country was observed.

The messages of the President and the Prime Minister were read and, screening of documentaries and discussion meeting with the participation of Bangladeshi and foreign speakers followed.

During the discussion, Honorary Consuls General of Bangladesh in Catania and Palermo, Italy namely Advocate Giovanni Vanadia and Mr. Vincenzo Di Tanto joined and shared their sentiments while paying deep tribute to Bangabandhu while touching on the importance of the speech.

Besides this, Ms. Mara Matta, Associate Professor at the renowned La Sapienza University in Rome, in a written message, referred to the Bangabandhu’s speech as a guide to the independence of the Bengali nation. 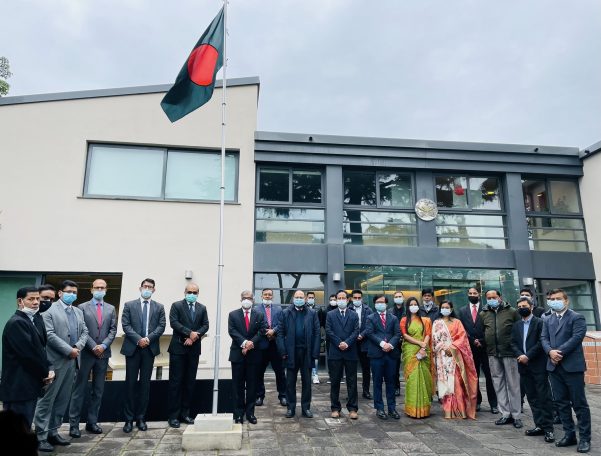 The discussants representing social-political and cultural organizations in the community, mentioned the March 7 speech as a unique event in the history of Bangladesh. Expatriate Bangladesh nationals living in other European countries and currently residing in Bangladesh also participated in the discussion.

The speakers also lauded the Embassy for its recent activities for the welfare of the expatriates.

Ambassador Md. Shameem Ahsan, in his welcome remarks, paid glowing tribute to the Father of the Nation Bangabandhu Sheikh Mujibur Rahman and all the martyrs of the War of Liberation. He said that the 7th March Speech not only inspired the Bengali nation to achieve independence, but would continue to inspire the oppressed, repressed and freedom-loving people all over the world.

Realizing this intrinsic importance, UNESCO in 2017 included the speech in the ‘Memory of the World International Register’ as a ‘World Documentary Heritage’- the Ambassador added. 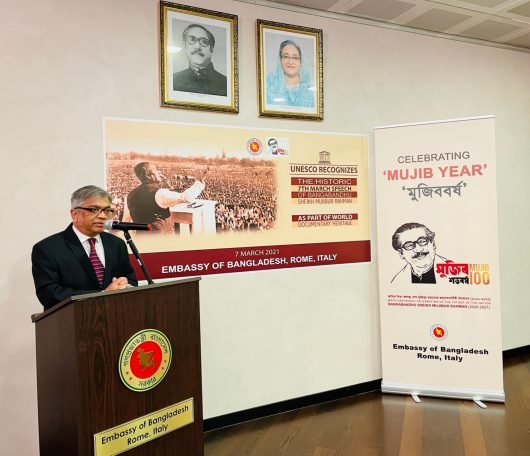 Ambassador Ahsan further said that year 2021 has a special significance as it marks Golden Jubilee of the Independence of Bangladesh and ‘Mujib Borsho’—the Birth Centenary of the Father of the Nation which commenced in 2020.

While mentioning the present government as expatriate-friendly, the Ambassador assured that the welfare of the community will be one of the top priorities of the Mission.

The event was held on a digital platform and in an in-house setting with the in-person presence of the officials of the Embassy only in view of the Covid-19 related strict health guidelines of the Italian Government.