Super Eagles and Al-Nassr of Saudi Arabia forward, Ahmed Musa has emerged the Nigerian Player of the Year 2018 at the 2nd AITEO/NFF Football Awards which held Monday night at the Eko Hotel & Suites, Victoria Island, Lagos.

Musa, beat the duo of Alex Iwobi of Arsenal and Odion Ighalo of Chinese club Shanghai Shenhua to claim the award.

Musa, claimed a double feat by also winning the best goal of the year award. 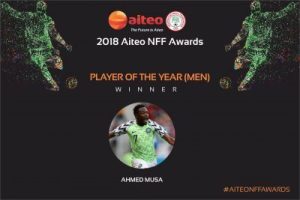 The female category of the award was won by Onome Ebi who plies her football trade with Henan Huishang in the Chinese Women’s Super League.

The glamorous ceremony was well attended by eminent football personalities all over the country, Africa and the world.

Present at the grand occasion were top Nigerian football heroes and top politicians across all levels of government.

The 1994 set of the Super Eagles were especially honoured with most of the players present.

The first female Secretary General of FIFA, Fatma Samoura who was present at the Awards was also especially honoured. 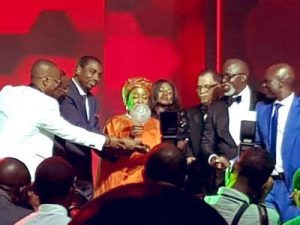