The Defence Headquarters (DHQ),has on Thursday assured Nigerians that the Armed Forces of Nigeria and the Nigeria Police, are not at loggerheads, as may have been erroneously portrayed.

This is just as they noted, that the two security agencies are working in synergy to guarantee peaceful and secure environment for all law-abiding Nigerians to exercise their civic right of voting.

The Acting Director Defence Information, Colonel Onyema Nwachukwu, stated these at a joint media briefing by spokespersons of the Armed Forces of Nigeria (AFN) and the Nigeria Police.

The media briefing was necessitated by the need to bring the general public up-to-date on their activities regarding the just concluded elections, and, to shed more light on certain security challenges witnessed during the elections and before the supplementary elections coming up on 23 March 2019.

Colonel Nwachukwu, stressed that there is no loggerheads between the Armed Forces of Nigeria and the Nigeria Police, adding that they have taken into account the concern of the Military high command and the Nigerian police about the alleged encroachment of some soldiers or military personnel into an INEC collation centre in Rivers state.

According to him, “If we are at loggerheads, I won’t be doing a joint press briefing with Frank. What we are doing now, is a replication of what the leadership of the Armed Forces and the police are doing at that strategic level.

“I think Nigeria is over and above any of us as security agencies and agents and I think that is the most important consideration in our relationships. We want to assure Nigerians that we will remain nonpartisan, neutral and as professional as we have always been”.

The DDI, also revealed that the Armed Forces of Nigeria will take a back seat while the Nigerian Police takes the lead in the security architecture for the supplementary elections.

He added that the incidence of the alleged encroachment is being investigated and a report will be made after exhaustive investigation, assuring Nigerians that nothing will be swept under the carpet as it will be as transparent as possible. 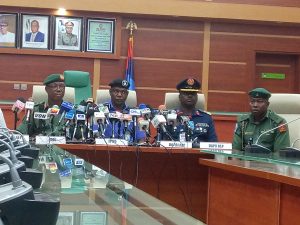 Earlier, the Police Spokesperson, ACP Frank Mba, stated that there is no doubt that the Nigeria Police is the lead security agency tasked with the provision of security at the polls, while the military is to support the Police and other security agencies by providing security at the outer cordons, including check points and other flash points when called upon as provided in Section 217 of the 1999 Constitution of the Federal Republic of Nigeria, as amended.

He, however revealed, that during the elections,some areas could not have been easily accessible without the assistance of the military, while the police were massively deployed in providing security around the polling units, collation centres and all the inner cordons around the voting areas.

On the alleged encroachment of INEC collation centre in Rivers State reportedly by some soldiers, he said, “This is considerably a very serious matter and of concern to the military as well as the police top hierarchy. Consequently, the military and the police high commands have ordered a thorough investigation of this incident and other isolated cases”.

He reiterated the joint commitment of the Police and the Military, to the peaceful conduct of the forthcoming supplementary elections scheduled for 23 March 2019, adding however, that any person or group of persons who attempt to truncate the elections will be made to face the wrath of the law irrespective of status.

Furthermore, he commiserated with the relations, friends and associates of some Nigerians both civilians and security agents who regrettably lost their lives during the last elections, stressing that no election is worth the live of any Nigerian, be it security personnel or civilian.